"Terra, our mother, has given us the right to dominate any inferior being in this universe. We have a right to proceed with that action."--General Erwin Von Schinoven taking an interview on Arrickburg

The Empire of Germanicus, sometimes called the Germanican Empire, the Imperium of Germanicus, or the Imperium to some people, is a large empire and utopian-dictatorship and one of the primary antagonists of the KSF universe. They are a Technolist state ruled by both a totalitarian military council and a theocratic monarchy led by the Fuhrer-Kaiser. Germanicus is also a major superpower that competes with other powers like Francia, Drachma, Arshea, Froggitaly, Cambria, and Yamato. The richest, largest, and strongest of the major powers, it holds colonies within Africanus, Pacifica, and Muliania. Its capital is the city of Berlin, Earth. Germanicus has an alliance with Xerxes and People's Republic of Amestris known as the Axis of Independent Nations.

In 62 million BC, during the Great Sundering of Amestris, half of the Amestrian race was transformed into the Mongooseral race, who had started out as tribes of hideous mutants. Their former kind had then banished them into a harsh life outside of civilization. Despite this, they managed to adapt in their new way of life as they got closer to what is now Ivaball. By 65 million BC, they had reached their full potential, but were driven away by Human tribes by 12,000 BC. In 10,000 BC, they had stumbled upon the planets Sieggott and Sigmar, two worlds that were both more prosperous and beautiful than their last homeland. Surrounding the Sol system, the Germanican tribes stayed away from Earth, fearing that such an action would only anger the gods.

By 600 AD, after years of chaotic barbarism, the Kingdom of Germanicus was founded, holding territories of the Germanican Republic and the territories of western Ivaball. By 653 AD, they had defended their lands against the Poseni Kingdom after a failed alliance had disappeared, resulting from the death of King Goroth of Sigmar. In 671 AD, tensions between the nations had vanished as the new ruler, King Argosa of Arrickburg had declared war on the Alpian tribes. By 765 AD, King Beldoef I led an expedition to the lands of the West in a need for territorial dominance over the neighboring worlds. Three years later, the result was a war with the Kingdom of Francia, who have claimed half of the Celorian Confederacy. In 1100 AD, Germanicus claimed chunks of land, surrounded by rivalling kingdoms.

In 1200 AD, about ten thousand Germanican soldiers joined along side Francia, Froggitaly, Albion, Hispania, and Posen during the First Holy Crusade. However, the campaign brought economic debt to the kingdom, leading into riots within the streets.

In 1203 AD, the council within the Germanican Kingdom began to question the rule of the kings and secretly plotted to assassinate him. However, by 1209, when the king arrived on the frontlines within a foreign country, he was struck down by a wave arrows, along with a blast from enemy starships. This ultimately led into a power struggle within the Kingdom as the land lords fought each other over who will claim the throne.

Terran Wars and the New Order

Germanicus is a technolist military state and a theocratic monarchy run by the People's Imperial Party of Germanicus and their leader, the Fuhrer-Kaiser. It is currently at war with the rivalling nations of Francia, Froggitaly, and the western nations of Europa. It's government is considered to be the most oppressive and bloodiest regime ever imagined, according to those of the Humans, Edanians and Romani. According to the native Germanican majority, it is seen as a strict, but benevolent form of dictatorship. Nevertheless, it is still viewed by others as an extremely brutal society, due to its religious intolerance, racism, technolist-burecracy, scientific advancement, mass surveillance, and even it's traditional slave system.

Its political slogans, "War is Peace", "Freedom is Loyalty", "Faith is Strength", and "Knowledge is Power", both influence the Empire's technolist ideals.

The Germanican Empire's belief in the "superiority of the Amestroid Race and the upper races" could explain the extermination of Edanians and Romani as well as the enslavement of the "lesser races", including humans. According to Cornelius, the Germanican people (most notably the Mongooserals) were to be the "sons and daughters of Terra", proclaiming them as a race destined to reign over the Aurelian sector with an ironfist combined with highly advanced technology and religious fanaticism. Race-mixing between the upper races is often rare while race-mixing with the lesser races is often abhorrent to the Empire and is thus declared an act of "sex-crime". Inbreeding, although unaffected by the Germanican race, is also viewed as a vice, believing that it would not only weaken their slaves, but would also result into the creation of "hideous, deformed wretches" who would prove too useless and destined for extermination.

Germanicus is a large and prosperous nation located within Central Europa. Arshea, Belgica, Celoria, and Francia lie west of the border, having to suffer border conflicts from the Imperial forces since the Terran Wars. Lombardia, Dacia, Aerugo, and Alpia are in the South, where the Lombardians and Germanicans continue fighting with Froggitaly. Drachma and Helvona, who had signed a non-aggression treaty with the Fuhrer after a humiliating defeat of the Drachman army, lie within the East. North of Germanicus are the Cambrian Empire, a major rival, and the Ork kingdom of Goritar. With a few deserts within southern Germanicus, most of the country is full of trees, forests, and metropolises. Some of its planets are full of mountains while others contain beautiful lakes and rivers.

The Imperium is primarily made up of the Mongooserals and Brutii, the two races that make up the native majority. Other races are included such as the Tellips, the largest minority, the Corelli, the Vash'gar, the Shidani, and the Gasdori.

Eugenics within the Empire has established a policy based on racial purity, military training, and intellectual discipline. The project involves in that of an individual's "purity" and intelligence within these four educational courses:

About 95% of the population have passed all of these tests and are given a role in society based on their intelligence, flexability, strength, strategy, and charisma. The other 5% failed the tests and are deemed "unfit" to live in society.

Germanicus holds a mixed economy run by its military, in which the free-market trade system is guided by the nation's government. Although a competitive economy, it is also under the influence of central planning, but only during times of war. A vast majority of the population is employed, leaving an unemployment rate of 1.2 percent. Since 2157, trade unions and the right to strike were forbidden and the right to quit was considered illegal.

Some imports and exports, including art pieces based on non-technolist ideals, are banned from Germanicus in order to preserve the Party's dominance over society. Others, including food, water, ammunition, and raw materials, are legalized either to be used by the masses or be used for military purposes.

Germanicus is mainly a nation with a mixture between Brutii and Mongooseral culture. The Germanican people usually practice one based on wealth, politic, luxury, honor, and war. Although higly advanced and civilized in a utopian fashion, they are also savage while in combat. They continue to use banners, war drums, and melee tactics as well as they use guns, grenaides, bombs, starships, and mechanized warfare. This shows an example of their war-like nature and is seen as a symbol of pride.

They also have proud way of representing their culture by using the symbol of a two-headed eagle, in which one head represents honor while the other represents loyalty. Although a mythological being, it is also extremely popular within Germanican mythology. However, it is now used as a national symbol rather than a sign of Paganism, which the Germanican Empire is extremely against it. The letter "M" represents the Mongooseral race, since they are the majority race native to their fatherland.

Gottwienism is the official monotheistic religion of the Imperium. It is based on the worshipping of Terra, formally the pagan goddess of war and justice. This was because of the nation's growing distrust with their Pagan roots. Formed in 1500 AD, Gottwienism started out as a minority religion within the Germanican Republic. By the end of the Germanican Civil War, the religion expanded towards its largest peak by 2067, under the Germanican Empire's great influence.

Athiests also make up the religious structure of Germanicus. Like Gottwienism, they became popular to the public, but they are not as large as the native religion itself. However, other religions such as Paganism are viewed as "evil inventions built by the spineless Terrans and Edanians." Gottwienists and Athiests would beat up Pagans and bring them to the military, where the Pagans would be sent into reeducation camps, eradicating any religion that is considered "inferior" to the state, including those of secret societies.

However, despite many who claim that Germanicus is a theocracy, there are some signs that more likely reveal that it is a mostly secular state, which includes the fact that the military, and not the Gottwienist church, has full control over society. Nethertheless, it still practices some form of State Gottwienism.

Germanicus, although a war-like nation, is a fanatically clean society that is gentle to wildlife and nature. Within the already industrialized worlds of the nation's Western, Northern, and Eastern regions, most of the remaining forests have transformed into natural parks and large gardens for tourists. The mountains are used as fuel pumps to create resources needed for the military. At the same time, they are also used to recycle already destroyed building parts and wrecked vehicles.

As shown by enviornmental evidence by its scientists, Germanicus is one of Aurelia's cleanest countries.

An alternate flag of the Germanican Empire. 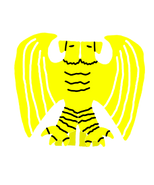 The Germanican Eagle is a popular symbol used to promote nationalism.
Add a photo to this gallery
Retrieved from "https://ksf.fandom.com/wiki/Germanican_Empire?oldid=7588"
Community content is available under CC-BY-SA unless otherwise noted.